An intellectual property lawyer and an experienced poker player have teamed up to create a card deck inspired by the 2003 Iraqi criminals “Most Wanted” cards. The “Deck of Disgrace”, available at www.deckofdisgrace.com, includes every U.S. senator who voted to acquit Trump of Abuse of Power. 50% of net proceeds will go to the Democratic Senatorial Campaign Committee (DSCC) and the Biden 2020 campaign. 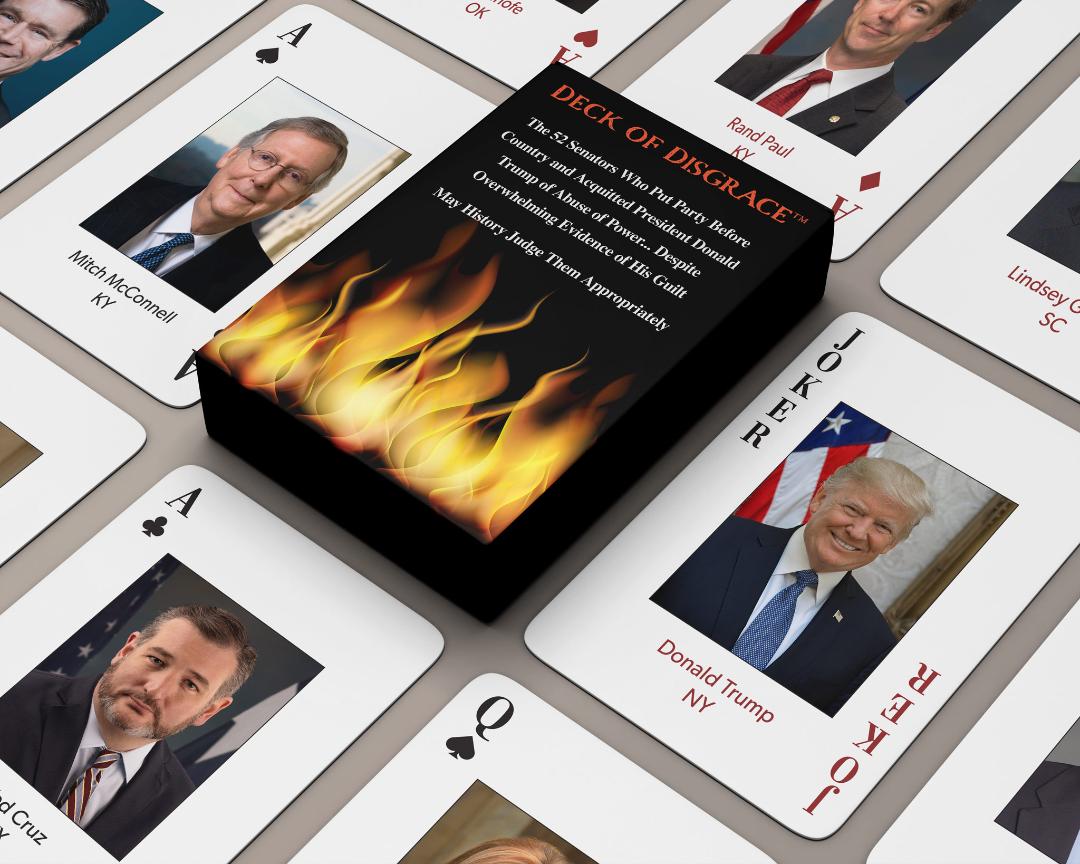 WASHINGTON (Viz Release) Aug. 5, 2020 – – For an IP attorney who’s spent decades advocating for artists and musicians, and a drummer who’s also a poker enthusiast that has finished in the money at the World Series of Poker, the initial shock over President Trump’s acquittal in the Senate impeachment trial gave way to further dismay as Trump mishandled the coronavirus pandemic. Why hadn’t the president been removed from office, as he so clearly deserved? The realization that exactly 52 senators kept Trump in place led to creation of the new “Deck of Disgrace” playing card deck, intended to permanently memorialize their dereliction of duty. As the nation slides into deepening recession, the coronavirus epidemic surges, and deeply rooted racial tensions boil over, the U.S presidential election looms – and with it, many races for senate seats held by Republican incumbents. The Deck of Disgrace encourages people to remember those 52 shameless senators who allowed the chaos to continue; 52 who acquitted the president on charges of Abuse of Power – instead of removing Trump from office after he was impeached by the House of Representatives. 52 names to remember, 52 senators to reject when they’re up for re-election.

In addition to the disgraceful senators, the Deck of Disgrace includes two Jokers (President Donald Trump and Vice President Mike Pence). The 52 senators are assigned randomly to card ranks and suits, except for the four Aces which are reserved for some of the most egregiously divisive offenders (Mitch McConnell, Rand Paul, Ted Cruz, and James Inhofe) and the Queens, which include Lindsay Graham and three other female senators. The deck also features an instruction card offering tongue-in-cheek suggestions for Deck of Disgrace card games such as “Ace-Hole” and “Stacked Deck”. Users are encouraged to come up with their own games using this collection of modern day villains, to pass time during the prolonged COVID-19 lockdowns that might not have been necessary if our leaders had taken swifter and more effective action.

The Deck of Disgrace can be purchased for $12.99 plus shipping and handling at www.deckofdisgrace.com. Bulk discounts are available for large orders. From now through Election Day, 50% of the net proceeds will be donated to the Democratic Senatorial Campaign Committee (DSCC) and the Biden 2020 campaign, to help oust Trump in 2020 and defeat every incumbent senator in the deck whenever they are up for reelection.

For more information or to order copies for yourself and friends, visit www.deckofdisgrace.com 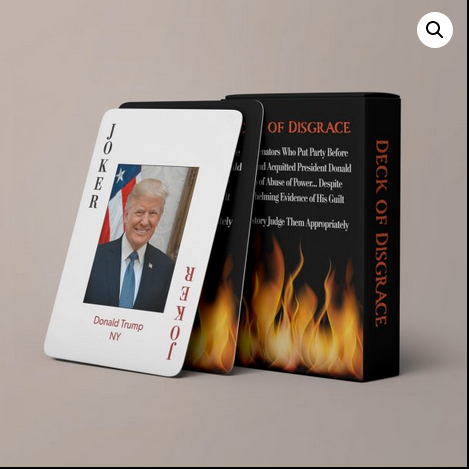 High resolution photo images, graphics, and sample cards are available to press and media on request