August 5, 2020 (Viz Release) – – On 26 June 2020, Soldiers of the famed 101st Airborne, 2nd Infantry Brigade Combat Team completed New Equipment Training (NET) for the Martin UAV V-BAT.  Teamed with Northrop Grumman on the Army Future Tactical Unmanned Aerial System (FTUAS) program.  As the most unique entry in the FTUAS program, the incredibly safe VTOL ducted fan air vehicle allows soldiers within inches of the drone while hovering. The goal of the FTUAS program is to evaluate runway and launcher independent VTOL systems that can accomplish more expeditionary missions and eventually replace the aging RQ-7 Shadow.  The next phase of the evaluation is a rotation through the Joint Readiness Training Center at Fort Polk, LA.  The soldiers will participate with the V-BAT over a two-week period starting in mid-August to further expand the tactical envelope for this very unique aircraft. 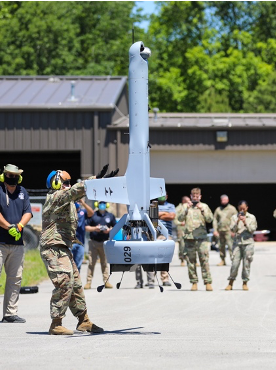 The V-BAT weighs in at 86 pounds (combat load) with a wingspan of 9.6 feet and is uniquely suited for expeditionary, tactical missions. The Screaming Eagles are the first unit to complete NET with this distinctive tail-sitter.

Heath Niemi, the Vice President of Global Sales and Development for Martin UAV, said “we are excited about having completed a great NET evolution with the premier expeditionary light infantry unit.  We think these soldiers appreciate the purpose-built nature of the true VTOL V-BAT.  As a true VTOL UAS, the V-BAT is soldier safe using a protective ducted fan design offering the operator the option of touching and approaching the aircraft while it is hovering or landing.   The V-Bat is a tactical system that a 2-Soldier team can launch and recover.  It is also a lightweight system transportable not just in helicopters, but also in small tactical vehicles, and is one of the best in class from the box-launch sequence.”

Niemi continued, “As a small company we are moving very quickly in a number of directions with the new technology. In the last 10 months, we have completed over 1,300+ hours at sea with the V-BAT and are continuing to work with the Navy, Marine Corps, and SOCOM to enhance the V-BAT for a number of missions. We are not standing still, but proceeding aggressively with a technology roadmap that more than doubles our payload capacity and endurance while maintaining our superior weight and form factors.”

MartinUAV has worked closely with the UAS Project Office and Army Futures Command (AFC) who were proactive in keeping NET on-schedule, even with the recent COVID-19 delays. With a successful NET behind them, the MartinUAV and Northrop Grumman team are excited about the great feedback they’ve received from the warfighters and look forward to the next phase of FTUAS at the Joint Readiness Training Center.

It is Martin UAV’s mission to provide the world’s best VTOL Unmanned Aircraft Systems (UAS) to defense, government and commercial markets. Our unique aircraft design and manufacturing expertise ensure our systems deliver safe, cost-effective and reliable operations to our customers.