January 25, 2021 (Viz Release) – – The 2021 Top 100 Global Franchises Ranking is up. Each year, since 2009, Franchise Direct has published its Top 100 Global Franchises Ranking, a snapshot of how a number of the most successful franchises in the world fared in the past year compared to the year before. It’s one of the most well-known franchise rankings, having frequently been cited by industry professionals.

This year, the ranking methodology underwent a slight facelift. Most notably, we dropped the restriction requiring franchises to be operating in at least two countries for inclusion. That allowed franchises such as Jersey Mike’s, Kiddie Academy, Culver’s, Pinch A Penny, McAlister’s Deli, Christian Brothers Automotive, and others to join the party. All told, the dropping of the two countries or more provision also nearly doubled the pool of candidates, making this the most competitive Top 100 ranking yet. 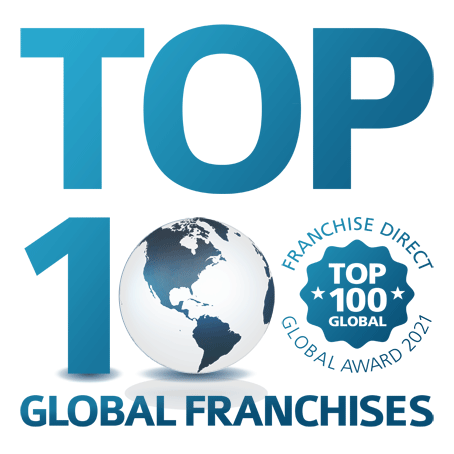 Overall, though 2020 was a tumultuous business year, it appears many franchises were able to persevere through the impacts of COVID-19. However, it should be noted: Because the evaluation period (approximately fall 2019 to fall 2020) includes the latter part of 2019 and the beginning of 2020, not all COVID impacts are reflected.

For the franchises at the top, though, how they weathered the COVID storm played a major factor in their success. In fact, this year’s #1, McDonald’s, found itself in “record year” territory by its own admission. Other big names in the top ten include pizza franchise titans Domino’s, Papa John’s and Pizza Hut. Ace Hardware, which was a beneficiary of the overall success those in the home improvement sector enjoyed in 2020, also found itself near the head of the class.

In addition to the ranking, the Top 100 reveal is accompanied by the Top 100 Franchises Report, which is full of tidbits on selected franchises to catch readers up on things they might have missed throughout the previous year in franchising.

For this year’s report, adjusting and adapting is the theme. What were the factors that allowed certain franchises to mitigate coronavirus-related losses? How did franchisors maintain a sales funnel without the presence of their traditional in-person channels post-February? The 2021 Top 100 Franchises Report is where you can find out.

The report is rounded out again with an international franchise market spotlight. And again, this year’s section dovetails with our latest franchise portal offering. This time it’s Franchise Direct New Zealand. The Oceanian nation has been dubbed the “most franchised country in the world” per capita by the U.S. Department of Commerce.

For reference, you can visit the Top 100 Global Franchises page for links to the rankings and reports for all years.

Established in 1998, Franchise Direct is among the pioneers of online lead generation for the franchise industry—and continues to lead the way. With nearly 15 platforms covering almost the entirety of the world, from North America to Latin America, Europe, Africa, Asia and Oceania, it is Franchise Direct’s mission is to be the go-to online resource for franchise opportunities as well as the knowledge center of choice for anyone seeking information on the franchise industry.