December 15, 2020 (Viz Release) – – A Trump aide told FDA Chief Stephen Hahn to resign if the vaccine wasn’t approved by the end of the day on Friday, Dec 11. Trump said in his tweet that the pressure he’s put on the FDA has taken five years off the approval process for “numerous great new vaccines.” (Newser)

“Trump is fulfilling his promise of a vaccine at warped speed, but this vaccine is unsafe at any speed,” says Richard Ruhling, MD, MPH, a board-certified physician in medicine who taught Health Science at Loma Linda University.

Virologists, microbiologists, epidemiologists, physicians, and health professionals from around the world are warning people re the vaccine. https://www.brighteon.com/35721a21-0352-4334-82e7-42cb2933d8a1 These are individuals who stand to lose jobs or positions but are telling the truth as they see it, in comparison to news media that speaks with one voice backed by big pharma and money in a warped picture that seems like they are an odd collection of “conspiracy theorists,” quacks and discredited people who can’t be trusted.* (Ruhling)

*Judy Mikovits, PhD is a brilliant woman who was published and praised until she turned whistleblower as she discovered a connection between chronic disease and vaccinations and when the pressure was on, she went to prison for 5 years rather than shrug it off or lie. This is a “witness” that Christ credited when He said, “In the mouth of two or three witnesses a matter is established.” The Greek word for witness is martys—martyrs!

*Another example is Robert F. Kennedy, Jr who won in court when the CDC could not furnish proof of vaccine safety. Government gave pharma protection in the 80’s when germ warfare might result in a need for a quick vaccine, so there is no consequence to a bad vaccine. They are unaccountable for the damage they do.

Ruhling went through US Senate offices with medical literature seen at http://LeadingCauseOfDeathPrescriptionDrugs.com until a senator said, “You are wasting your time—they own us,” speaking of drug company donations to their re-election.

*A third example of a whistleblower is here, https://www.youtube.com/watch?v=5QboF42ziSA&feature=youtu.be but note that she has to spell V-a-x or there is damnable censorship to free speech! We will lose freedom fast unless people will do their own research and speak out–stand up to be counted. Why all this pressure to control the masses? Global government will not be good!

Ruhling says cites Google as an aid to research—ADE is Antibody Dependent Enhancement of a virus that makes vaccines dangerous and the substances used in the vaccines range from pork gelatin, dog or monkey kidney tissue, (aborted) fetal cells to mercury used as a preservative in multi-dose vials, but it’s a neuro-toxin. Pregnant women are told an ounce of salmon may risk too much mercury but we get it in vaccines.

Already there have been deaths from the vaccine and many have had bad reactions, especially serious pain in the arm. Let those who push the vax line up to be the first, says Ruhling who adds that recombinant RNA nucleotides from other animal species is the last thing he wants injected in his body. Approaching 80, but in excellent health, he notes the untimely deaths of alternative medicine physicians and says if he is found dead, people guilty of murder could pay in hell.

Ruhling offers further information and a book on his website with a dvd titled Eating that shows how most health conditions are reversible—an 8-minute intro can be seen on the dvd/book tab, http://HealthHappinessDestiny.com 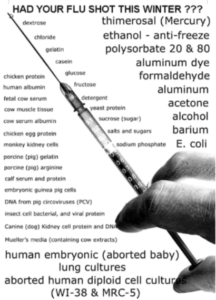 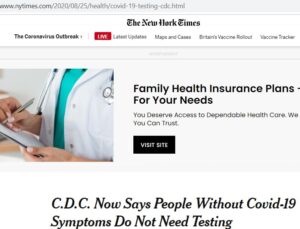 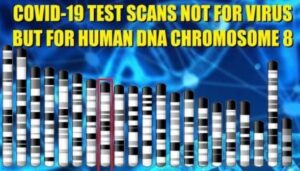